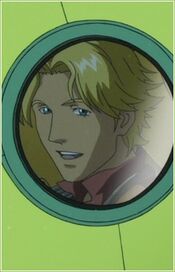 Pinion's Brother was a young man who lived in the Gargantia Fleet and worked as a salvager, alongside his younger brother.

One day, Pinion's older brother decided to take Pinion on a dangerous and risky investigating Whale-Squid territory. In the hope of that rara and valuable salvage might be found hidden in the area. While investigating the area, Pinion's brother did in fact find treasure in the form of some valuable lost technology. However, in doing so he stumbled upon a Whale-Squid nest. While Pinion was able to get to safety, his elder brother was quickly overwhelmed by the creatures and killed.