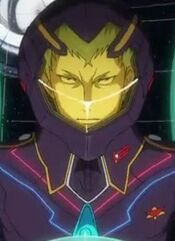 Kugel was Ledo's commanding officer in The Galactic Alliance of Humankind Military.

Kugel was the commander of all Machine Caliber pilots aboard the GAH carrier Lamorak. As a commander he was privy to the knowledge that the Hideauze were humans who modified themselves to be able to live in outer space. Kugel piloted the machine caliber Striker X3752. 5 carriers were seen at the Closer pass but only one Striker Machine Caliber was seen during the battle, so the depths or extent of Kugel's authority is not fully known.

Kugel was in command of all Machine Calibers from the GAH carrier Lamorak during the Galactic Alliance Closer pass operation which was a make or break operation for them in the war against the Hideauze. The attack initially met with some success but ultimately failed when the Hideauze's weapon the Blossom Sail regenerated before GAH's weapon the Dimenstruim could fire a second shot. With the GAH Fleet crippled, the order to withdraw was given. Kugel's machine caliber Striker informed him that all units have four minutes to return to the carrier Lamorak or be left behind. Ledo asked Kugel's permission to stay behind to give the rest of the group time to get back aboard ship. Kugel told Ledo to hold out of 200 seconds, (3 minutes 20 seconds). Kugel returned to save Ledo when Hideauze squid had grabbed on to him. Kugel then Ledo ordered off the battlefield despite two pilots who like Ledo had been caught by Hideauze squids. As Kugel and Ledo headed to the Lamorak with 40 seconds left, Kugel realized that a large number of Hideauze were following and had to be slowed down long enough for the fleet to escape and close the wormhole. He ordered Ledo to land and stayed behind to delay the Hideauze. Six months later, it's revealed that Kugel (like Ledo) had somehow ended up on Earth and in a fleet. Unlike Ledo, Kugel took command of the fleet and began making a second "Avalon" on Earth. Kugel is eventually reunited with Ledo in the Sea of Mist during Pinion's salvage of the ancient treasure. Kugel informs Ledo that he is unable to leave his cockpit due to some unknown illness. Kugel asks Ledo to help change this world. Eventually, it is revealed that the next target is Gargantia. Ledo asks Kugel to change his mind but he refuses. On the day of the operation, Kugel (piloting an upgraded Striker) is challenged by Ledo's Chamber which has also been upgraded. Initially, Kugel easily overwhelms his junior officer as Ledo's machine caliber, despite it's upgrades, is not a match for him. Pinion fires a shot from a cannon recovered from the sea that manages to give Ledo a window of opportunity in which Ledo rams Kugel into a tower. Despite the impact, neither machine or pilot is injured. Ledo opens Striker to confront him as Chamber told him early that it was most likely that Kugel has no illness and is in his cockpit because he chooses to be. When Ledo looks in, he sees Kugel, except Kugel is already dead.  When Kugel's helmet opens and air hits his body, it deteriorates into nothing, revealing that Striker X3752 has been giving Ledo orders the entire time.

It is later revealed that Kugel was able to exit the wormhole safely, whereas Ledo crash landed. Upon, his exit, Kugel is informed by Striker they are approaching Earth. Kugel arrives in time to save a young girl named Linaria from attack. In exchange for his help, the girl agrees to provide him with as much information as she can about Earth. The girl's older sisters attempt to overthrow Kugel from his position as Fleet Commander by having him face the ocean in which are revealed to be the Whale Squid. Kugel and Striker decimate all of the Whale Squid with ease and firmly cements his position. Linaria, who had been acting as Kugel's second command, dies from an illness. One of her older sisters. Aleria offers herself to replace her dead younger sister in an attempt to deceive Kugel. Kugel seems to accept but kills her, saying that he has better use for her dead than alive. Kugel galvanizes the fleet with their deaths and again reaffirms his position as the uncontested leader of the fleet. In the end, it is revealed that joining of fleets without proper medical treatments on hand caused an increase in disease. As the GAH does treat illness but did not have treatment on the fleet. Kugel easily contracted the same disease that killed Linaria. Kugel eventually dies and Striker takes command in his death, leading to the events of finding Ledo and Chamber.