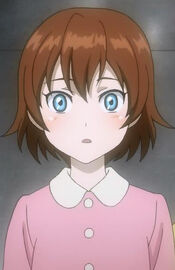 Elaine was once a human who lived during the beginning fifth Ice Age, on The Earth.

Elaine was the daughter of Ryan, an important member of an organization of bioengineering scientists. The people who would eventually become to be known as the Evolvers.

It would appear she eventually participated in the Evolvers experiments in genetic modification using artificial symbiotic lifeforms, to become one of the first generation of Hideauze.